How lockdown has impacted the jobs market - Aug 2020

Back to Blogs
posted almost 2 years ago By Verity Hudson

A summary of the REC's Report on Jobs August 2020, detailing the impact lockdown has had on the jobs market

While permanent placements still decreased last month, the pace of decline has slowed hugely as lockdown begins to draw to a close. With the economy opening up through June and July, we would expect an improving trend in the coming months as firms recover from the worst of the crisis. The fact that temp billings rose in the Midlands and demand is now increasing for temporary blue collar and construction workers is also a good sign.

Neil Carberry, Chief Executive at the REC, said:  “There are far fewer vacancies in the market than before March, and more people looking for jobs. Recruiters will be key to helping people build confidence and find work – but the reality is that Government needs to help kickstart hiring. Reducing employers’ National Insurance rates would cut the cost of hiring, and a good Brexit trade deal will also support stronger business confidence and investment.”

Has the availability of permanent and temporary staff changed post COVID-19? 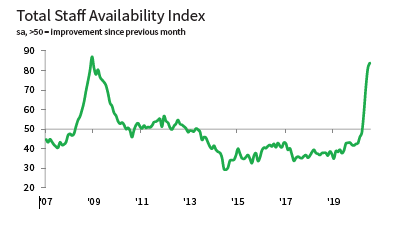 The Midlands saw historically sharp increases in permanent and temporary labour supply, although this remains in line with other regions. 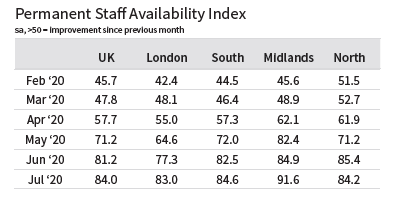 The supply on temporary staff in July saw the sharpest increase in nearly 23 years of data collection. This substantial rise in the availability of temporary workers was predominantly driven by layoffs due to the pandemic and greater market uncertainty. This is a similar case for permanent recruitment, with the increase linking to redundancies stemming from the pandemic and reports of furloughed staff seeking new roles.

How has lockdown affected job opportunities in the Midlands?

Permanent placements continue to fall in July, but at a slower pace

Similar to each month since March, July saw a reduction in permanent vacancies across the Midlands. However, July saw the softest decline in the last five months, with only modest falls. The midlands actually saw the slowest reduction out of the four monitored regions, suggested a more positive market awaits.

Meanwhile, demand for temporary staff in the Midlands increased for the first time in five months during July, which has also been evidenced at Hewett Recruitment. The uptick was the quickest since January 2019 and solid overall.

Which skills are in demand following UK lockdown?

How have rates of pay been affected by Coronavirus?

The reduced demand for staff, alongside budget cuts and a substantial increase in the availability of labour, lead to further reductions on starting salaries throughout July. This is replicated in the hourly pay rates seen for temporary staff, which had the steepest reduction seen since mid-2009- likely due to the increased candidate availability, pushing down pay rates. 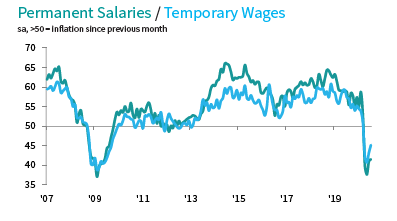 Latest data from the Office for National Statistics showed that employee earnings, including bonuses, fell by -0.3% on an annual basis in the three months leading up to May. Though only marginal, the rate of decline was the quickest seen since the three months to April 2009.

How will the furlough scheme impact the jobs market?

As lockdown measures gradually rise, business confidence begins to increase. However, while various industries instigate a slow recovery, many are facing tough decisions regarding staffing. The next three months will be critical to understanding the true implications of the furlough scheme, as further redundancies are to be expected as cost are adopted by businesses.

Advice for those facing redundancy

For further advice and support regarding the impact of COVID-19, please do get in touch.